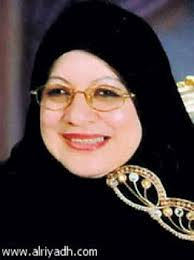 
Saudi woman among world’s most influential figures
Sohaila Zain Al-Abedeen Hammad
JEDDAH: ARAB NEWS
Wednesday 29 May 2013
Last Update 29 May 2013 12:36 pm
Saudi women’s rights activist, Sohaila Zain Al-Abedeen Hammad has been nominated for the medal of excellence for the most influential figure in the world in 2013 presented by Waldenburg International College and the International Council for Human Rights, Arbitration, Political and Strategic Studies (ICHAPS).

Speaking to Radio Netherlands Worldwide (RNW), Hammad said Saudi women havd achieved a remarkable progress over the past few years, as they take on many leadership positions in the Saudi community. She became a member of the Shoura Council, and ran for office during municipal elections.
Hammad indicated to the strong relationship between women’s renaissance and the nation’s growth, pointing that the country won’t achieve any further progress unless it changed the stereotypical views of women. The Kingdom should give Saudi women opportunities equal to those of their male counterparts in terms of rights and duties. Hammad stressed the first step would be the effective participation of women in public life.
The nominee explained that her nomination for the medal among 65 candidates of the most influential figures in the world in the field of human rights would support her case in fighting for the rights of Saudi women.
Hammad is a leading Saudi figure. She is considered to be one of the foremost Islamic scholars who support women’s rights, and she is a former goodwill ambassador for the United Nations Development Program (UNDP).
She is a member of many women’s associations and organizations. She took many leadership positions and published books and studies.http://www.arabnews.com/news/453241
Vote for Dr. Suhila Zain Al-Abdeen Hammad at http://www.waldenburginternationalcollege.org.uk/AllSurvey.aspx